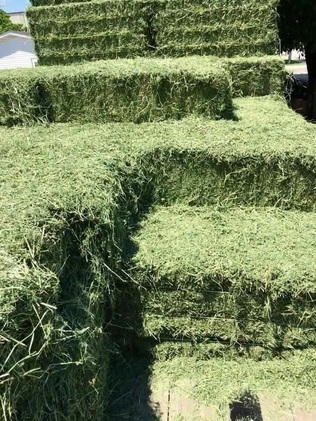 GRADE A or #1 ALFALFA 3 String
This is our biggest seller by far and what we are known for. Customers who want the best quality prefer Grade A hay. In Arizona alfalfa grows all year, Grade A would be the 4th through 10th cutting, the later in the season the stem gets smaller. 1st, 2nd, and 3rd cutting would be Feb-April. This is beautiful green hay as well but extremely high protein, not good for horses but great for dairy cows. Unless you are feeding dairy cattle you want May-October hay. Cardew Hay/Barn 21 won’t ever ship the first 3 cuttings to horse people, even if they ask for it. Too much protein can cause digestive stress, laminitis and founder.

Step 2: Visual inspection - If it came out of a clean field the first thing I look at is color. Number one/Grade A hay must be dark green all the way through. Next: Leaf - this is where the feed value is, so it matters. If its not leafy, it wont test very well.

Step 3: Is Stem - We look for a medium to fine stem that will be easy for a horse to chew. If its stemmy, its not considered Number One/Grade A hay. The last step is the analysis - If it passes the field test and visual test the last thing is the actual test from the lab. Hay cores are taken randomly and sent to the lab for analysis. We are looking for the correct range for RFV ( relative feed value ), moisture, micronutrient content, and to see how clean it is. The test will even tell us if there is a higher than average amount of dirt in the hay. If it looks pretty but doesn’t test well, its not Cardew Number 1/Grade A  premium hay- our "Gold Standard". Does your current supplier go to this extent? Do you even know where your hay originated? Probably not-Because few hay brokers care about quality,  and ultimately, the health of your horses. Our customers come back time after time because the transparency of our hay selection process and the fact that we care enough to tell a client "no, that hay is not good for your horse, this is what we recommend."  It's not about making a sale, it's about building a relationship.

#2 ALFALFA/Grade B 3 String- This is where a person might get a deal. If all the other stuff lines up but say, for example it’s a tick off color, its Number 2/Grade B… might test just as well, and be every bit as clean but not as pretty so it’s a little cheaper, usually about $20/ ton less.

ALFALFA COW HAY 3 String and 4X4X8 Big Bales– Available usually after the monsoon season in Arizona ( July-Sept ) and was supposed to be premium hay until the weather decided to rain on it. Cow hay can be a lot of things, the key thing to know is that this is a low grade, cheap, damaged alfalfa that might be suitable for cattle, but would never recommend it for horses. Usually what happens is it's hay that got rained on in the field right before or after it was baled. Most of our clients who need cow hay are feeding roping steers, bucking bulls, etc. it could be moldy, and usually tests low in feed value so we don’t recommend feeding it to market livestock if you are going for gain.

#1 ALFALFA BIG BALES 4x4x8, 1150-1300 lbs
The 4x4x8’s in Arizona are usually put up dry. Most producers are not going to make big bales with the same moisture content as the 3 string bales because it might sour or burn. This hay is best used for Livestock, as the stem is usually a little too big for horses and the lack of moisture makes it too dry for good leaf retention. Dry = poor leaf retention= lower feed value. Great hay to grind or make pellets out of, but not the best to feed by the flake.

RYE / ALFALFA MIX – this is probably the most palatable of all forages out there. Great quality rye and alfalfa grown together to make a beautiful hay. Available all year, this is fancy hay that a lot of our friends in other states don’t know about but should!